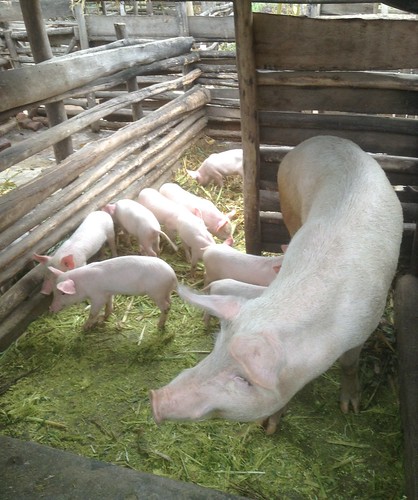 Pig production is a source of income and nourishment to over 1.1 million smallholder farm households in Uganda. While women are traditionally barred from owning cattle, they are allowed to own pigs, making piggery popular especially in the rural and peri-urban areas of the country. But lack of adequate quality pig feed is a prominent constraint given the seasonality of the mainly crop-based pig diets and the high cost and poor quality of commercial concentrate feeds, which further diminishes the profitability of the enterprise.

Despite various studies on the benefits of pig rearing to smallholder households, the roles and responsibilities of men and women and the entitlements each can claim from pig-enterprise income are unknown.

Researchers from the International Livestock Research Institute (ILRI) and the University of Guelph in Canada explored smallholder pig farmers’ perceptions of the potential outcomes of adopting improved pig diets made from locally available feed resources on their farms. The research was carried out in Masaka District under the ILRI-led Smallholder Pig Value Chain Development (SPVCD) project which was funded by the International Fund for Agriculture Development (IFAD) and the European Commission (EC).

Using a qualitative study design, it examined pig farmers’ potential to adopt the diets; constraints to adoption; ownership and access (land, pigs, cash); division of labour; allocation of pig-enterprise income; and the ways in which decisions about these topics are made at the household level.

But the results showed that pig ownership and labour investment by women in male-headed households did not guarantee that women had decision-making ability or benefited from pig-enterprise income. The threat of domestic violence also inhibited their decision-making ability. Furthermore, polygyny reduced intra-household communication transparency.

The researchers concluded that adopting improved diets could benefit smallholder pig-raising households and farming communities, but lack of funds and human/pig food competition may limit adoption.

Future agricultural productivity improvement projects need to be aware of the diverse nature of households with regard to intra-household decision-making, ownership, control, and use of assets and income, and the potential impact of domestic violence and polygyny/concurrent relations.