The International Women’s day is commemorated worldwide on 8 March each year. ‘Make it happen’ is the 2015 theme. Towards this day, this blog will feature stories of partners collaborating with the International Livestock Research Institute (ILRI) in gender research. This first article features Pratyusha Basu, an associate professor of geography in the Department of Sociology and Anthropology at the University of Texas at El Paso, USA. 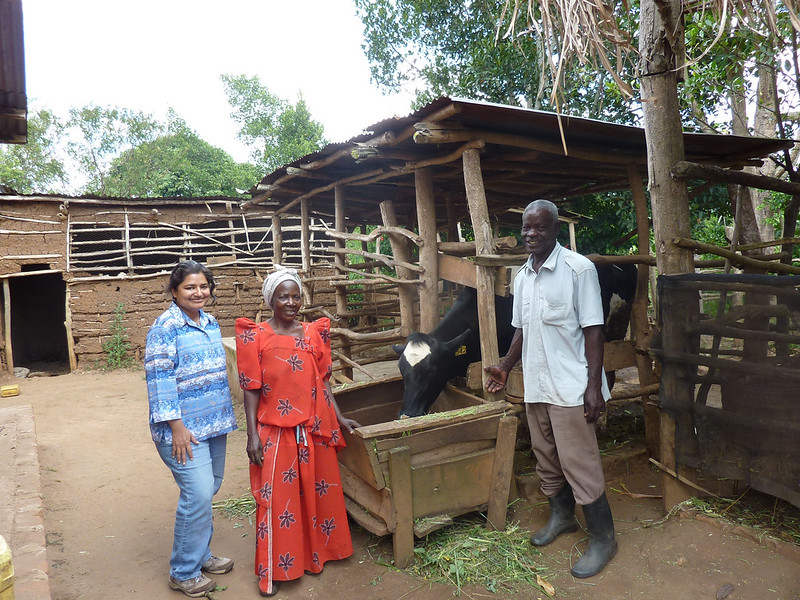 Pratyusha Basu (left) with dairy farmers in Uganda during a study of the EADD hub (photo credit: ILRI)

What inspired you to venture into gender science and research?

My interests in gender and development have been cultivated through both personal experiences and my research endeavours. I am originally from India, where poverty is very visible; so from a very early age, I wanted to know how economic and social inequalities were produced and how they could be resolved. As I learned about pro-poor development programs, it seemed that there were relatively few success stories and this drew my attention to the successes of Amul, a smallholder dairy cooperative in the state of Gujarat in western India.

Amul started as a farmers’ movement aimed at increasing the bargaining power of small-scale farmers and fetching higher prices for their milk. The movement eventually grew into a co-operative and was very successful in improving the productivity of, and returns from, small-scale dairying.

The success of this model prompted the government of India to support its replication in rural communities across the country. But while these co-operatives worked very well in some areas, they were less successful in others. I wanted to know why and this question formed the basis of my research at the doctoral level. I noticed that while many reasons were given for the success of cooperatives, the role of women’s work was rarely mentioned or considered as part of the contributing factors.

Visits to rural cooperatives showed me that where women contributed their time and labour to household dairying, the profitability and success of the co-operatives increased. However, women’s willingness to contribute was also shaped by their own understanding of where their labour would bring the most returns. This shows that both the acceptance and refusal of development interventions have to be explained from the perspective of women’s own understanding of the value of development.

To me, gender issues are a very compelling way of explaining the outcomes of rural development programs and for this reason I was in Kenya in 2013/2014, to understand smallholder dairy programs from the perspective of women’s work.

Why is it important to use a gender lens in development?

There are two reasons why it is important to incorporate gender dimensions in development:

What has been your experience in gender research?

Gender is increasingly being recognized but nevertheless, there is still a tendency to isolate it in its own compartment. Also, gender is often considered pertinent only at the household level and barely receives recognition and attention in terms of how it permeates all aspects of our lives. We have to continue to build a world where gender becomes an aspect of diversity rather than of discrimination.

What more do you think can be done to achieve success in incorporating gender issues in development?

There is need for a change in economic and social arrangements, which can only be achieved by being vocal about gender issues and we also need to create space for other voices, so that we include other identities and stay attentive to what is being excluded in the gender and development debate. For example, discussions around promoting family planning in India often led to initiatives which were only targeted at women, but recently there is an initiative to bring in men into this discussion. Now that is gender mainstreaming!

Pratyusha Basu was a research fellow at ILRI under the Livelihoods, Gender and Impact program from September 2013 to January 2014. In collaboration with ILRI, she evaluated how the hub-based approach of the East Africa Dairy Development (EADD) program has shaped women’s participation in dairying in Kenya and Uganda. Her research in Kenya and affiliation with ILRI was supported by the US Fulbright program which sponsors international educational exchange for students, scholars, teachers, professionals, scientists and artists.

2 thoughts on “Using the gender lens in agricultural research and development: Why does it matter?”