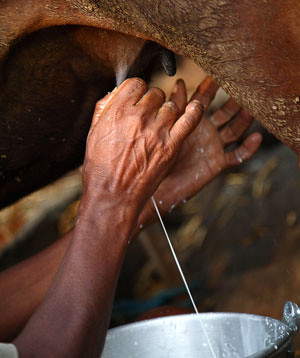 The article explains how dairy farmers in East Africa are earning more by learning more from volunteer farmer trainers who are selected and trained by the project to play a key role in training their fellow farmers in areas such as ‘growing of livestock feed crops and feed conservation techniques such as silage making, hay baling, and management of crop residues.’

Started in 2008, the collaborative EADD project is improving dairy production and access to markets for smallholder milk producers in Kenya, Tanzania and Uganda. The project is funded by the Bill & Melinda Gates Foundation and implemented by  Heifer International (as the lead partner), TechnoServe, the World Agroforestry Centre (ICRAF), the International Livestock Research Institute (ILRI) and the African Breeders Service Total Cattle Management (ABS).

Isabelle Baltenweck, an agricultural economist and the interim project leader for the Livelihoods, Gender and Impact Program at ILRI is playing a lead role in the project.