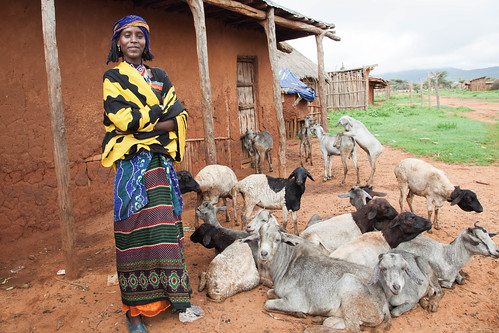 The value chain analysis (VCA) approach has been emphasized as a fundamental way to address issues in agricultural research for development that ensure development and economic growth in developing economies. Several scholars have demonstrated the importance of VCA in agricultural research for development (see the resources listed below); VCA is important because it gives detailed explanation and context to the observed occurrences in different farming systems and settings. This brief by the International Fund for Agricultural Development (IFAD), states that “value chain analysis is essential to an understanding of markets, their relationships, the participation of different actors, and the critical constraints that limit the growth of livestock production and consequently the competitiveness of smallholder farmers”.

What about gender and VCA?
Gender is a critical component of the farming system, and women play a significant role in agricultural and livestock value chains. Nevertheless, it is reported that gender issues have been overlooked in most value chains (refer to the IFAD brief mentioned above). To address this issue, International Livestock Research Institute (ILRI) gender scientists organized and conducted a rapid small ruminant value chain analysis in the eight action sites of the CGIAR Research Program on Livestock and Fish in Ethiopia. See the program research sites here and view a poster here on the Ethiopia small ruminant value chain development. This study was carried out during the period of December 2012 to February 2013 with five main objectives:

This effort to engender the VCA faced many challenges; Annet Mulema a gender scientist working in the Ethiopia value chain, notes that although data collation tools were gendered, enumerators failed to capture information on gender differences or similarities at the different nodes of the value chain. She further alludes that the final reports completely omitted gender data and analysis. Follow-up discussions with enumerators revealed that the majority had failed to obtain gender data. The few who attempted to collect data on gender differences and similarities did not know what to do with the data and hence did not report on the variables.

What can be done?
Mulema says this failure can be attributed to a lack of understanding of the importance of collecting gender and sex-disaggregated data coupled with a broader lack of skills on qualitative data collection. To address this challenge, it is important to train the enumerators on how to collect gender/sex disaggregated data, and emphasize to them its importance.

In addition to lack of capacity of enumerators to obtain the required information, other broader issues often arise when collecting gender/sex disaggregated data. The data collection tools (which include survey questionnaires) tend to be very long, leading to a loss of respondent interest in answering questions. Moreover, sampling relies on selecting household heads, (the majority of whom are men) and hence very few women participate in the interviews. As a result, views of the majority of women are not elicited, either because they are submerged by asking only the male household head, or because the experience of female heads of household does not equate with that of women in male-headed households.

Further, researchers need to ensure they are addressing the issues that are fundamental to the farmers and livestock keepers. To achieve this, the researchers need to consider a two-fold approach; first examine and understand the bigger picture (i.e. desired result beyond the data collection) and secondly identify the approach to take in achieving the desired result. This will help the researchers design data collection instruments which help capture the required information to ensure that gender dynamics of the value chain are incorporated in the planned interventions.

The data needs to fit the mental causal map of the people involved. If data collectors articulate why it is important to collect gender/sex disaggregated data, then they can easily pay attention to the gender dynamics. If people do not understand the importance of gender/sex disaggregated data, they will think it is a huge waste of time to collect such data. If you are asking people on the ground to gather data, it has to be meaningful to them, and they have to be compensated well for their time. Otherwise data collection will not be satisfactory and you see this sort of vicious cycle of not getting data back or getting incomplete data – Annet Mulema

Get the reports of the Ethiopia small ruminant value chain analysis