Continuing our interview series featuring gender scientists around International Women’s Day, this post features two upcoming women scientists. We get to hear their perspectives about their career in science, and their experience in the graduate fellowship program at the International Livestock Research Institute (ILRI). Through this program which is implemented by its  capacity development unit, ILRI plays a significant role in contributing to the advancement of upcoming scientists.

Caroline Bosire is an ecologist, with a master’s degree in biology of conservation and currently in the third year of her PhD program. 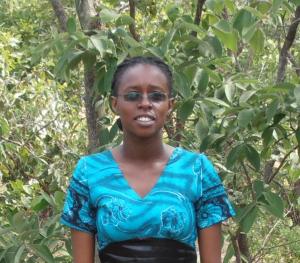 A student at the University of Twente in the Netherlands, Carol is studying natural resource use in livestock production with a focus on water resource use for milk and meat production in different systems in Kenya. She is hosted at ILRI because she is on a NUFFIC scholarship which requires that she spend most of her time in Kenya and her focal area is relevant to the institutes research focus. Having graduated from the University of Nairobi; with a bachelor’s degree in zoology and chemistry, Carol opted to immediately pursue a master’s degree following guidance from her lecturer (Dr. John Githaiga). This was albeit the fact that at that time, there were options to take up jobs in the banking industry or as medical sales representatives in the medicine industry, which were paying quite well for a science background. It was while in the first year of the masters course that she realised she was well suited for research due to her curious mind.

Her experiences as a graduate fellow at ILRI, some challenges and opportunities
Carol does not view the challenges associated with being a graduate fellow as gender specific per se but more as graduate fellow based. She mentions the main challenge as being associated with supervision, in instances where the main supervisor leaves ILRI for another position or assignment elsewhere. This she says challenges the fellow’s progress because there is a chance that there may be a decline in the institutional relevance of the study as a result of the exit of the main supervisor. However, she maintains that the graduate fellowship commands a huge advantage to her as an upcoming scientist, because it exposes her to experts in a wide field of disciplines. It provides an opportunity for her to interact with them and is able to receive good critique and feedback on her work. This she asserts is an opportunity that so many students only wish for.

Roles for ILRI to contribute to increased number of women scientists
Having been at ILRI for four and a half years (rising though as an intern to a research technician and now a PhD student), Carol states say that it is necessary for ILRI to establish an internal support network to provide a mechanism for mentorship of upcoming women scientists. She highlights the AWARD mentorship program as an example of a structure befitting what she would like to see from ILRI. This way, there will be a system and structure for a follow up of the graduate fellows and provide opportunities for placement to further their career beyond the graduate fellowship.

Significance and contribution of her study to the livestock research sector
Carol is confident to mention that the area she is focusing on is quite new and is very grateful that her supervisor in Kenya, Jan de Leeuw, linked her to the developer, Professor Arjen Hoekstra, (who is also her supervisor) of the concept she is looking into. Being her University supervisor, it has given her an opportunity to work very closely with the authority in this field.

For young women aspiring to be scientists
Carol’s advice to the young girls who aspire to be women scientists is that they should get involved in an area that they are very interested in finding out more about. “They do not have to be knowledgeable in that field, because research is more interesting when you do not know what the results could be in your area of investigation. That way they will enjoy the experience!” says Carol.

Rachael Aye an AWARD fellow, is a veterinarian currently in the fourth year of her PhD studies working under the supervision of Dr. Jan Naessens

Rachael is pursuing her studies at the Catholic University of Leuven in Belgium, working on vaccines, specifically antigen discovery. As a vet and with a background in food safety, she chose to undertake a PhD in the area of vaccines because in her opinion, science is not a one man’s world but rather it is ‘one science’ such that the vets, the food scientists, the food safety practitioners and others are all interconnected; As such, she maintains that one cannot work in isolation and needs support from other fields in order for all the science to be put in perspective. By the time she finished her A-levels, Rachael says that their career guidance was not so good, such that the only ‘good’ career option at that time was viewed as pursuing either medicine or pharmacy, and the at the very least nursing. She did not know about veterinary medicine until after her A-levels when she met a vet, interacted with him and admired that he could treat animals. This prompted her to apply for the course, during which the microbiology unit was very interesting and nurtured her interest in science even further.

Her experience as a graduate fellow at ILRI: some challenges and opportunities
As a female scientist Rachael mentions that there are so many challenges they go through especially balancing work and life. However, she professes that her supervisor has been very supportive in this respect. In addition, having very little experience in the work environment (because she has gone through her studies right from undergraduate to PhD without taking any kind of formal employment) being here has exposed her to the work environment and she has been able to experience the kind of rules that govern the work environment, which are very different from those in the school setting. ILRI has a very diverse international outlook and the graduate fellowship has given Rachael the opportunity to interact with people from different nationalities

Roles for ILRI to contribute to increased number of women scientists
Interestingly, Rachael deems the representation of women in the science career as fair. She mentions that for the past decade or so there have been a lot of efforts towards supporting women and as a result, women are now in a place to compete favourably with the men. She further says that we might soon reach a point where the women will compete even more favourably because of the much support and exposure from various programs such as AWARD also mentioned by Carol, which are not available for men. “Although young girls in high school still need support in some areas, at this level I do not think we should be acting feeble but should be able to compete favourable to get the opportunities” says Rachael.

Rachael points out family issues as one of the main hindrance that women scientists face in progressing up the career ladder because in most instances very few spouses will be willing to accompany their spouse to international organisations outside their home countries. As a result, the women are left to choose between their careers and family which is very tough. Secondly, she mentions that the society’s view on gender roles at times makes it hard for a woman to progress up the career ladder, meaning that they will have to put in twice as much effort as compared to the male colleagues, something that takes a lot of strong will and determination.

Significance and contribution of her study to the livestock research sector
If she is successful in her antigen discovery, there might be a vaccine perhaps against Contagious Bovine Pleuropneumonia (CBPP) which will be a great achievement for the livestock sector. However, Rachael adds that research in her field takes a long time for results to be realised because of the nature of the field including other issues such as government policy.