The East African Dairy Development (EADD) project received a grant of USD25.5 million from the Bill & Melinda Gates Foundation to expand its operation in a second five-year phase, from 2014 to 2018, and to scale up the impact from phase one, implemented from 2008 to 2013.

The project, led by Heifer International aims to boost milk yields and incomes of small-scale farmers in Kenya, Uganda and Tanzania. While giving an introduction during the launch of phase 2 at Crowne Plaza in Nairobi on 15 January 2014, Heifer International’s country director said that phase 2 will reach more than 130,000 farmers.

The chief guest at the launch was Julius Kiptarus, director of livestock in the Kenya Ministry of Agriculture, who said the launch of the second phase of this project was timely and in line with Kenya’s vision 2030 and its ambition to increase investments in agriculture.

“EADD is about changing mindset of the farmers and providing them an opportunity to make a living, not by relying on handouts”~ Isabelle Baltenweck, ILRI program leader 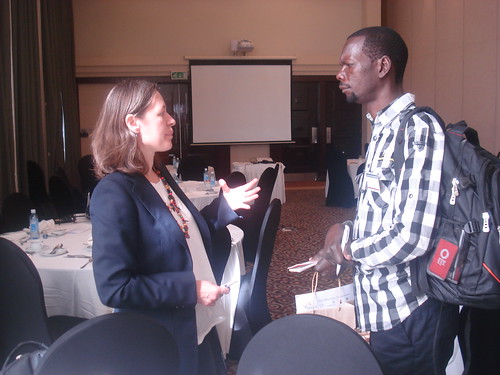 Isabelle Baltenweck is interviewed by a journalist from Scidev.net during the launch at Crowne Plaza, Nairobi on 15th January 2014 (photo credit: ILRI).

She says that this regional dairy project is about changing the mindsets of the farmers and providing them with new opportunities to make a living not by relying on handouts or subsidies but by improving their skills and joining groups to improve their access to markets.

A farmer present at the launch – Kenneth Loimapong, from Lelan Dairy, in Pokot District – agreed. ‘This dairy project has helped us earn our own money, and encouraged many of us to give up trading firearms and cattle rustling.’ Baltenweck says that this second phase of the dairy project will work to further increase household milk production and gender equality in dairy production in the region.

Women and men take on distinct responsibilities for particular tasks in dairy farming, and hence gender is an important organizing principle that should be looked at for increased success in this kind of a farming system. As such EADD aims at pushing forward a gender agenda in phase two of the project. While highlighting past achievements of this project in an ILRI Livestock Live Talk seminar series last year last year, Baltenweck and her team said the project has adopted a comprehensive gender strategy that guides their gender focus, analysis and monitoring work. The work of this project in Tanzania is aligned with ILRI’s ‘dairy value chain’ work there for the CGIAR Research Program on Livestock and Fish.